This smoked cinnamon gin & tonic is in a class all of its own.

Yes, you heard that right. Smoked cinnamon takes this Gin and tonic to subtle flavor heaven. It adds a festive twist and depth to the cocktail, adding a wow factor for your guest.

Whatever the weather, this eye-catching Smoked Cinnamon G&T cocktail should enchant your imagination. ⁣

Making a smoky cocktail might seem intimidating, but trust me, with just a little technique and safety in mind (of course), you too can make this gin-based cocktail or any smoked-infused cocktail at your next sip and chill.

For this smoked cinnamon Gin and tonic cocktail, you need a good quality Gin, if possible, get one with a floral note. I partnered with Empress 1908 Gin a few months back to create this Empress gin cocktail, and it was a delight. Empress 1908 gin transforms from deep indigo hue to bright lavender, soft pink, or fuchsia depending on the mixer added. That’s a Wawu if you ask me.

First, you'll start by flaming the cinnamon stick as if you are burning incense.

Cover the burnt cinnamon stick with the chilled glass and allow the smoke to swirl around the glass.

Shake vigorously until chill. Strain the mixture into the cinnamon swirled glass and top with tonic water. Garnish with a lemon twist and serve. Sip responsibly!

Can I make this easy gin cocktail ahead of time?

No. It’s best to consume this winter cocktail recipe immediately.

Here are some substitutes to make this gin cocktail at home:

Did you make this Gin and Tonic recipe? Share with us on Instagram using the hashtag worldlytreat(#worldlytreat); we’d love to see what you made. Don’t forget to pin it for later! 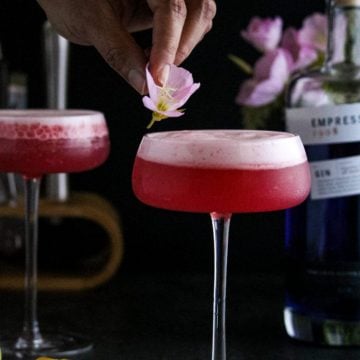 It only takes a couple of minutes for the cinnamon smoke to swirl around the glass. If you want a more infused cinnamon taste, smoke the cinnamon stick and place it in a jar with a lid. Mix the cocktail in the jar and swirl a couple of times before straining into a glass.

This site uses Akismet to reduce spam. Learn how your comment data is processed.

Thanks for stopping by. It means the world to me. My blog is about creating quick, easy, flavorful, family-friendly meals found around the world for the everyday home cook. You can taste the world right in your kitchen without having to take a trip. Please follow along. Let's get cooking!

Worldly Treat is a participant in the Amazon Services LLC Associates program, an affiliate advertising program that is designed to provide means for sites to earn advertising fee through advertising and linking to amazon.com. Please visit my Disclosure and Privacy Policy page for more details.